Sprawled at the lap of the Himalayan mountain range, Gurudongmar lake is Sikkim’s most beautiful and pristine lake. This lake is also one of the highest lakes in the world, situated at the height of 17100 feet above sea level. As snow-capped mountains encircle the lake, the reflection of the mountains on the crystal clear blue water creates a spectacular view. The breathtaking scenic beauty of the Gurudongmar lake attracts tourists from all over the world.

Gurudongmar lake, Sikkim is famous for its blue water surrounded by snowy Himalayan mountain range. It is one of the most beautiful lakes in India you will ever visit in your lifetime. In the early morning, the lake looks spectacular with white clouds and surrounding snow-capped mountains under bright sunshine. If you are a peaceful person and want to rejuvenate yourself, standing by the lake can make you happy.

You can walk by the bank of the lake, enjoy the natural beauty and take photos using your camera. But do not go far away from the entry point as the weather is unpredictable there. The last time we visited Gurudongmar lake, we faced a blizzard and snowfall coming from the cold mountains. Fortunately, we were close to the stairs and remained unharmed.

You can gaze at the lake from the parking area, from where, you have to climb up and down to the bank of the lake using the concrete steps. Colorful prayer flags can be seen flying along one side of the lake.

The story behind Gurudongmar lake

There is a story behind naming ‘Gurudongmar’. The name Gurudongmar came by honoring Guru Padmasambhava, a legendary Indian Buddhist mystic who introduced Tantric Buddhism to Tibet and established the first Buddhist monastery there. It is also believed that he visited Tibet through this place. To think of the red-colored wrathful form of Guru Padmasambhava, the lake was named Gurudongmar, which means ‘The Red-Faced Guru’.

How to reach Gurudongmar lake?

To visit Gurudongmar, first, you have to reach Lachen, a small town in North Sikkim. Lachen is well-connected to Gangtok, by an almost 7-hour drive. You can reach Gangtok from the New Jalpaiguri railway station or Bagdogra airport in Northern West Bengal.

The journey from Lachen to Gurudongmar lake must start very early in the morning (4-5 AM) as the distance is almost 66 kilometres with multiple check points and difficult road conditions. Your first stop will be at Thangu, a tiny village just 31 km away from Lachen, where you can take your breakfast. Thangu is a valley with lush meadows at an altitude of 13000 ft. From April to June, the area is covered with beautiful alpine flowers. The foliage changes from green forests or large trees to mostly smaller bushes. It takes almost 3 hours to reach Gurudongmar Lake from Thangu.

Further along the way, you will come to Giaogong Army Check Post, the highest altitude check-post in the world located at an altitude of 15000 ft. Before entering Gurudongmar Lake, your paper will finally be checked at Giaogong.

Then the car will go through a high Tibetan plateau where you can see rocky mountains and hardly any vegetation. A snow peak of the Himalayan range will come closer as you move ahead. Blue sky, clouds, snowy mountains, beautiful landscapes along the route will surely mesmerize you. Apart from the Indian army, there is no human habitation in the barren land. Only a herd of mountain blue sheep and yaks graze in the distant valleys.

Gurudongmar Lake in North Sikkim cannot be visited throughout the year because of high altitude, extreme cold, and harsh weather conditions in different seasons. Here are the ideal times to visit Gurudongmar considering weather and temperature conditions-

From October, the weather started getting cold in Gurudongmar lake. In winter, a chilly wind blows, snowfall begins, Gurudongmar lake and its environs are covered with snow. The average temperature remains within the range from 12oC (day) to -13oC (night).

The lake also freezes because of the extreme temperature. But November is the best time to visit the lake because of the blue sky, clear weather, and partially frozen lake. The early weeks of December are excellent to see the frozen lake and the snowy area. Later on, the road towards Gurudongmar lake is often closed because of heavy snowfall. It would be best if you refrained from visiting there during the months of January and early February due to harsh weather conditions.

Mid-March to June is a perfect time to visit Gurudongmar Lake as well as the entire North Sikkim. The pleasant weather helps to explore the beautiful place without causing any hazard of snowfall or landslide. Snow-covered mountains, picturesque landscapes, greenery, and a wide variety of beautiful flowers make the entire journey to the lake mind-blowing. If you want to see the colorful flora, fauna, and rhododendrons in full bloom, then you have to visit Gurudongmar lake in the months of April to May.

The months from July to September (monsoon) are not suitable to visit Gurudongmar due to heavy rainfall and extreme weather conditions. The roads become slippery, and lots of landslides occur during the rainy season. 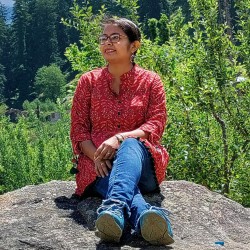 Koyeli is a contributing author at Naturediary. She is a nature enthusiast traveling across offbeat destinations exploring the wilderness. Backed by environmental science expertise, Koyeli has an enormous experience of nature traveling across India.